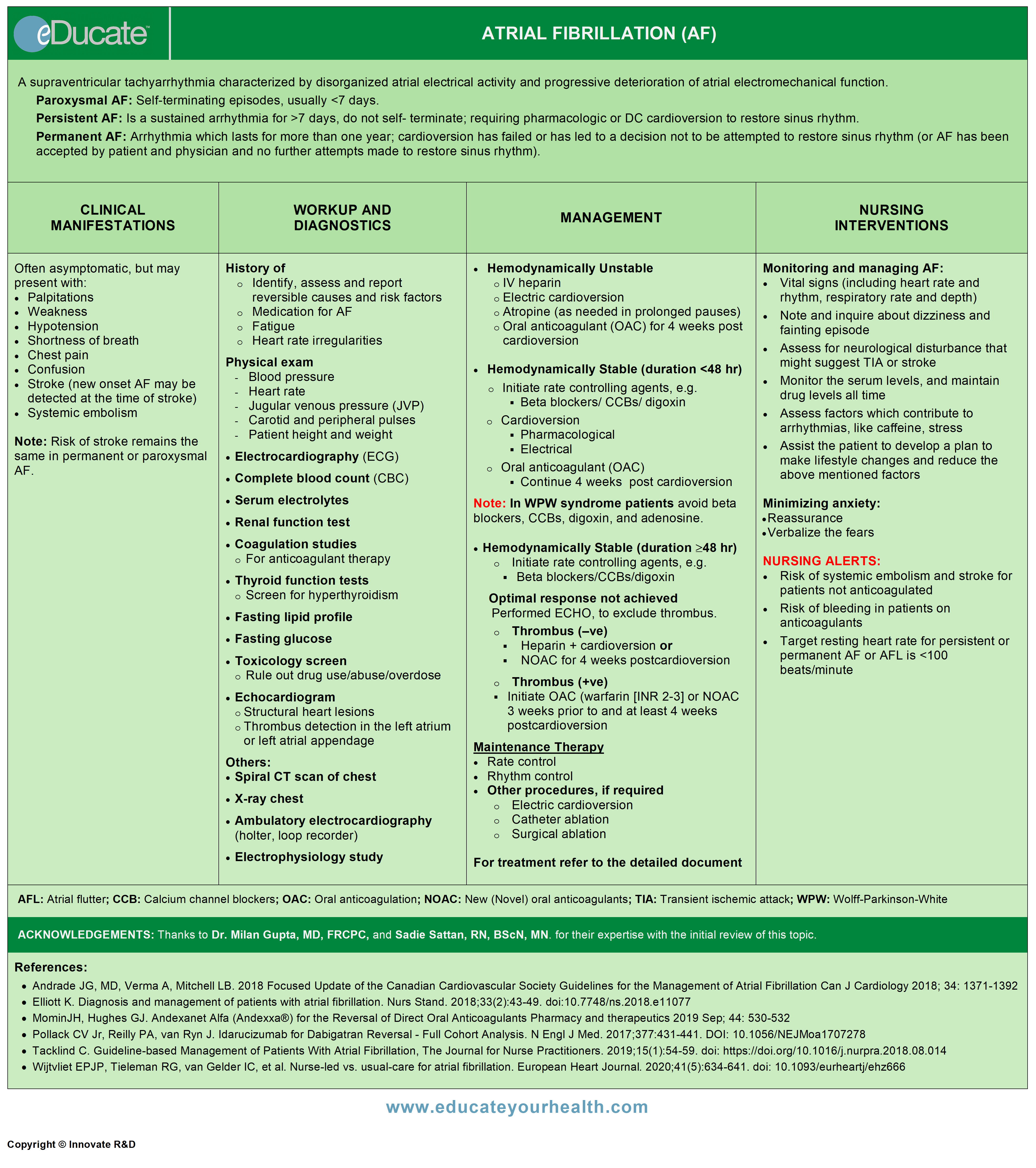 Prevalence and incidence increase with age.

Approximately 1% of the general population has 1 in 4 lifetime risk of developing AF.

Distribution of prevalence according to the age is as follows:

Note: Risk of cardioembolism is the same whether permanent or paroxysmal atrial fibrillation (PAF).

Full cardiac and pulmonary exam is valuable in reaching a definitive diagnosis and includes the following:

Imaging studies may include:

Note: Anticoagulation should be used in this setting. particularly for AF of unknown duration (or ≥48hr) or if patient is at high risk of stroke (mechanical or valvular heart disease, previous TIA or stroke). Unless contraindicated all patients require ≥4 weeks of oral anticoagulation post cardioversion.

In selected patients, initial therapy with rate slowing agent is acceptable while waiting for spontaneous cardioversion, such as

If the patient is still in AF, cardioversion without prior anticoagulation may be considered in low-risk patients <48h

Note: Class Ic drugs (propafenone, flecainide ) should be used in combination with AV nodal blocking agents (beta-blockers or calcium-channel blockers) to avoid paradoxical increase in ventricular rate due to the drug-induced conversion of atrial fibrillation (AF) to atrial flutter (AFL). Class Ic should also be avoided in patients with structural heart disease. Cardioversion in patients with implanted pacemakers and defibrillators

AV junction ablation and implantation of a permanent pacemaker

HOWEVER, this agent is now contraindicated in:

Propafenone or Flecainide – Class I:

“Pill in the Pocket” for selected patients with atrial fibrillation

Caveat: Avoid oral antiarrhythmic therapy in patients with AF/AFL or advanced sinus or AV nodal disease unless pacemaker or defibrillator has been installed.

a) Patients with AF often require prophylaxis with anticoagulant therapy, unless contraindicated

The therapy, in turn, is based on clinically relevant thromboembolic risk factors which are summarized as follows:

b) The risk/benefit ratio for patient selection has been outlined in number of scales/tools, which have been summarized in one table for convenience

c) Based upon the therapeutic bleeding risk stratification scores (HAS-BLED score) in AF:

f) Special considerations in the patients who are on prevention of thromboembolic complication:

Patients on antiplatelet therapy or OAC scheduled for surgery:

Note: Most procedures with a low risk of bleeding, such as cardiac device implantation and most dental procedures can generally be safely performed without interrupting anticoagulant therapy, provided the INR is not supratherapeutic in the case of warfarin Other consideration for life-threatening DOAC bleed:

b) AV node ablation and implantation of a permanent pacemaker

Usually reserved for those patients who have failed a catheter ablation strategy or who have planned concomitant cardiac surgery.

Note: Patient must be on an AV nodal-blocking agent prior to initiation of antiarrhythmic. No more than one dose during a 24-hour period.

Exact mechanism of action not known; however, the acceptable hypothesis is as follows:

Note: Intramuscular injections are not preferred due to severe pain at the site of injection.

Typical use for IV heparin

Symptomatic AF with consideration of cardioversion or thrombus detection on ECHO

Caveat: For patients with moderate or large strokes, the above may be modified to a low initial exposure for the avoidance of supra-therapeutic PTT and potential risk of bleeding:

May sometimes be used for patients with AF/AFL

Conversion from dabigatran to parenteral anticoagulant

Prevention of Stroke and Systemic Embolism in Patients with NVAF:

Prevention of Recurrent DVT and PE: