Shingles also called herpes zoster or zoster, is a painful skin rash with blisters caused by the same virus that causes chickenpox, the varicella-zoster virus. It usually appears in a band, a strip, or a small area on one side of the face/head or body (arms, legs, torso).

After a person recovers from chickenpox, the varicella-zoster virus continues to live within the nerve cells inside the body. The virus is usually inactive and does may not cause any further problems. However, the virus can become active again causing a painful skin rash along the affected nerve; this rash is known as shingles). Hence, anyone who has had chickenpox is at risk for getting shingles.

Transmission:
The shingles rash can form blisters on the skin. A person with shingles is not infectious before the blisters appear nor once the rash crusts. However, during the blister phase of the rash, the virus can spread, and the person exposed to the virus who has never had chickenpox or received the chickenpox vaccine could develop chickenpox, not shingles.

The affected individuals may experience the symptoms differently, it can cause burning, shooting pain.

After a person recovers from chickenpox, the varicella-zoster virus continues to live within the nerve cells inside the body. The virus is usually inactive and does may not cause any further problems. However, the virus can become active again causing a painful skin rash along the affected nerve. 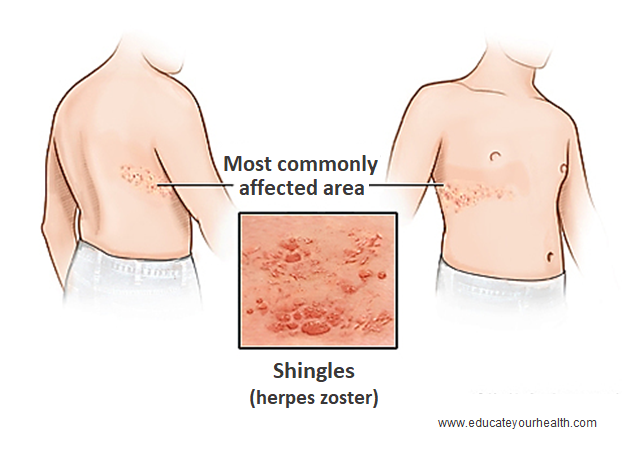 Rash stage: Rash typically appears after 1 to 5 days after the initial symptoms begin and initially looks like small, red spots that turn into clusters of fluid-filled blisters.  Since the virus lives with nerves, the rash usually develops as a single stripe on either the left or right side of the body or face, along the nerve path. The most common place for shingles is a band on the torso around the waistline. Shingles that develop on the face, particularly if close to the eye can lead to injury to the eye, and loss of vision.  This condition needs urgent medical attention for appropriate anti-viral treatment.

Healing stage: Blisters typically dry up and crust over in 7 to 10 days and generally clear up within 2 to 4 weeks. Healing is usually complete, but some scarring may occur in some individuals.

Other symptoms of shingles can include: 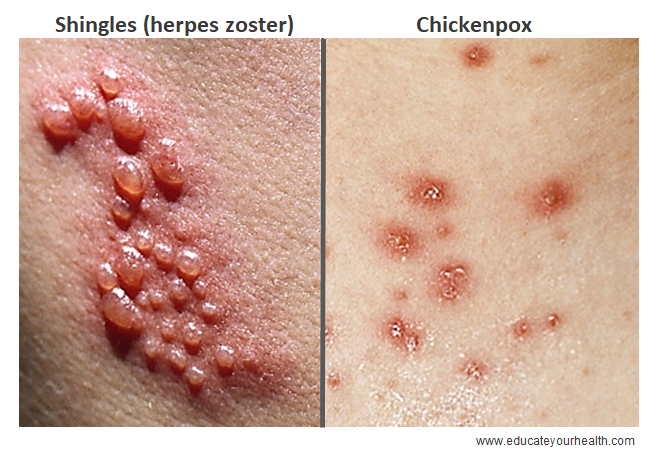 About 10 to 15% of people who get shingles develop a painful condition along with part of the affected nerve, where the rash occurred.  This was called postherpetic neuralgia (PHN). It is more common among older individuals (over 50 years of age). PHN is the persistence of pain for more than a month in areas of skin supplied by nerves infected with the virus even after the rash is gone. PHN pain can be severe and has been described as sharp, burning, and jabbing. The overlying skin is exquisitely sensitive to touch, to the extent that some individuals with this condition may not even be able to tolerate the touch of clothing on the affected skin. Sometimes, instead of pain, the PHN can produce numbness or a persistent itch.

Generally, no tests are necessary. The distinctive appearance and distribution of shingles rash are usually sufficient for a doctor to establish the diagnosis. A painful, blistering rash that appears on a strip of skin in the typical pattern and is highly suggestive of shingles.

Rarely, in cases where the diagnosis is unclear, a sample from the blisters can be analyzed or a skin biopsy can be done to confirm the diagnosis.

There is no cure for shingles. If you think you have shingles, contact your healthcare provider as soon as possible to discuss treatment. The severity and duration of an attack of shingles can be significantly reduced with antiviral drugs if started within 72 hours of the first appearance of the rash. The drugs are likely to be ineffective if started more than 3 days after blisters appear.

There are several antiviral medications that can be used, such as

Symptomatic management of herpes zoster may include:

It often takes a combination of treatments to reduce the pain.

Factors that increase the risk of Shingles include:

The shingles vaccine is only a preventive therapy and people can still get shingles after receiving the vaccine but the vaccine decreases the chances of developing shingles or reducing the severity of shingles in people who develop shingles despite immunization.

The vaccine is recommended for most people 60 and older.  Individuals, between 50 and 59 years of age should consider the vaccine as well, and discussed it with their health professional.

Prevention of spreading the virus to others:

A person is not contagious before blisters appear or once the rash has developed crusts.  Hence measures need to be taken during the blister phase to reduce transmission to others:

Generally, people get shingles once, but there are chances to get it again. For most healthy people, the blisters tend to clear in 7 to 10 days and the rash tends to clear completely within 2 to 4 weeks often leave no scars. The pain usually stops in 1 or 2 months but if it last longer than it’s called postherpetic neuralgia (PHN), and may require specialized medications for nerve pain.