Asthma is due by inflammation and mucus that forms along the passageways leading into the lung. When we inhale, air moves through the trachea (windpipe) and into the bronchi that supply the right and left lung. Bronchi are divided into many other smaller branches called bronchioles (bronk-e-oles). Individuals with asthma have the tendency to develop inflammation and mucus within the bronchioles which restricts airflow. Furthermore, the bronchioles have muscular walls which constrict (tightens) during an asthma attack, further limiting airflow and adding to breathing difficulty. Attacks can come on suddenly and may be mild, moderate or severe, the latter may require urgent medical attention. 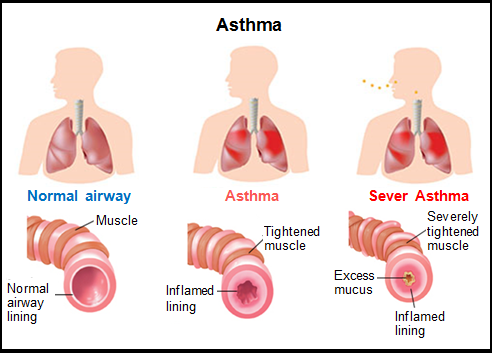 Symptoms that suggest the need for emergency treatment:

Treatment for asthma involves the relief of symptoms during attacks and the prevention of future attacks.