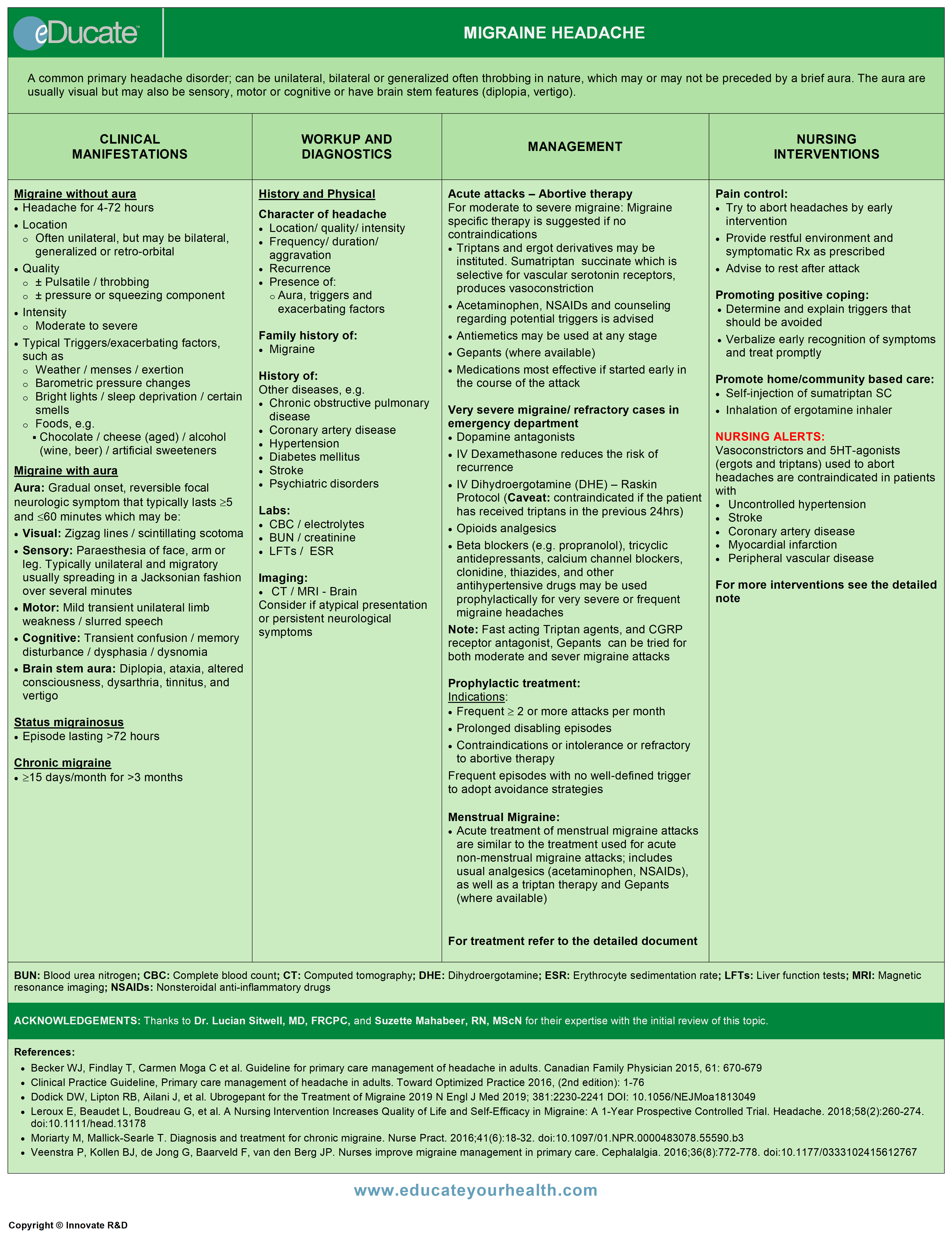 Thanks to Dr. Lucian Sitwell, MD, FRCPC, Lecturer, University of Ottawa, The Ottawa Hospital-Riverside Campus, ON Canada, and Dr. Tejal Patel, B.Sc.(Pharm), Pharm.D., Clinical Assistant Professor, School of Pharmacy, University of Waterloo, Waterloo, ON Canada for their expertise with the initial review of this topic.

Unilateral, bilateral, or generalized often throbbing headache, which may or may not be preceded by a brief aura. The latter are usually visual but may also be sensory, motor, or cognitive.

Summary of types of migraine: May present with or without aura.

Often develop gradually over 5-20 mins; may last for less than 60 mins. These are reversible focal neurologic symptom and includes:

Note: There are other visual auras, but the ones listed above are the main.

Headache with the features of migraine follows aura usually within 60 minutes; may begin during aura and sometimes>60 minutes post aura. Less commonly headaches lack migrainous features or they may be completely absent.

NOTE: Ttriptans may be considered as well; Spectrum study demonstrated in HIS migraine sufferers, triptans were very efficacious in mild head pain and is useful in the early treatment of disabling headaches, rather than later phase of the course.

2) Moderate to severe migraine course, migraine-specific therapy is recommended if no contraindications

Note: Fast-acting Triptan agents, and CGRP receptor antagonist, Gepants  can be tried for both moderate and severe migraine attacks, e.g:

In spite of the use of multiple drugs for migraine prophylaxis, many questions regarding the mechanisms of action remain unanswered and require further research.

It might take 4-8 wk for the substantial benefit to occur.

It has been suggested, that there are 2 main targets for migraine prevention:

The recommended agents for migraine prevention are as follows:

Other agents may have some beneficial effect, requiring further research:

Other treatment strategies include:

Including, but not limited to the following:

Increased risk of medication overuse/induced headache, if used on more than 8-10 days per month.

Indication: Acute treatment of migraine. Approved in USA; not currently available in Canada

Note: May take ~4 weeks to reach its maximum effect.